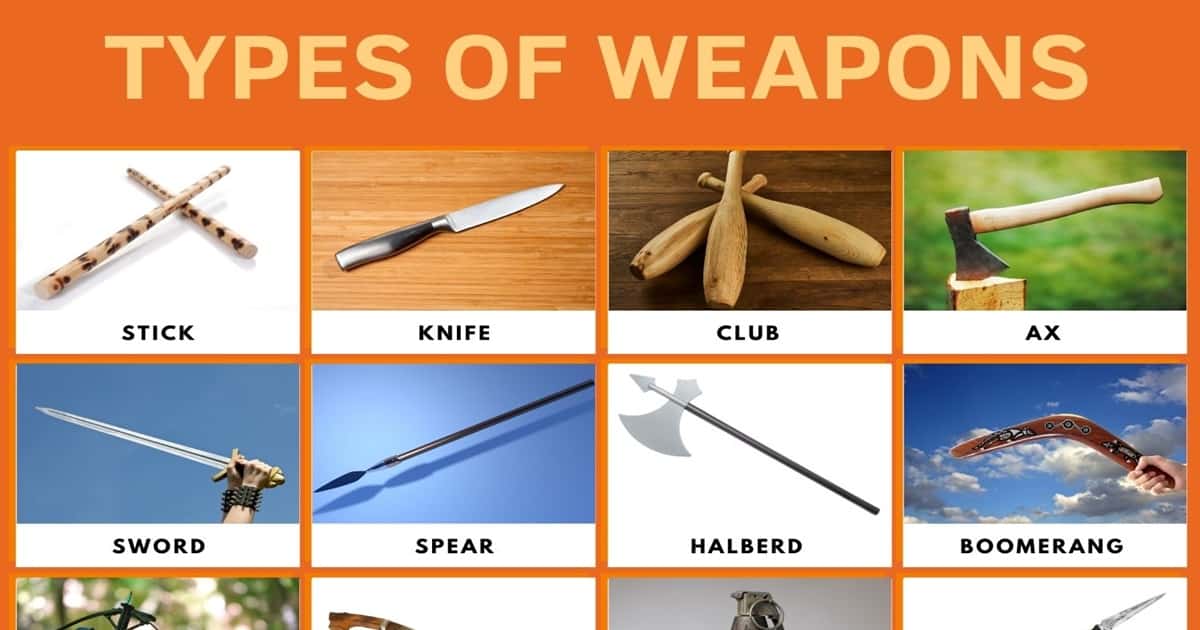 Weapons have long taken a role in history, hunting, and warfare. They are devices that have been used in varying degrees for fighting, obtaining food, self-defense, and have even served as a basis for diplomatic treaties. But what are weapons and what kinds of weapons are there? This article will explore what weapons are, as well as give a list of different types of weapons.

Weapons are implements, tools, or machines that are intended to injure or harm. They usually refer to devices that are outside (or apart) from the body, those whose possession would constitute a state of being armed. In contrast, being unarmed refers to a lack of weapon ownership or possession.

Weapons are used in hunting, war, law enforcement, crime, self-defense, and martial arts. They can be as simple as a stick, ax, or club, or as complex as machine guns, cannons, bombs, chemical gases, or nuclear devices.

In recent decades, weapons have been used in warfare on a very large scale – such weapons are referred to as “weapons of mass destruction”. Since these weapons have been seen as a threat to human life, treaties and diplomatic measures have been taken to reduce their use. 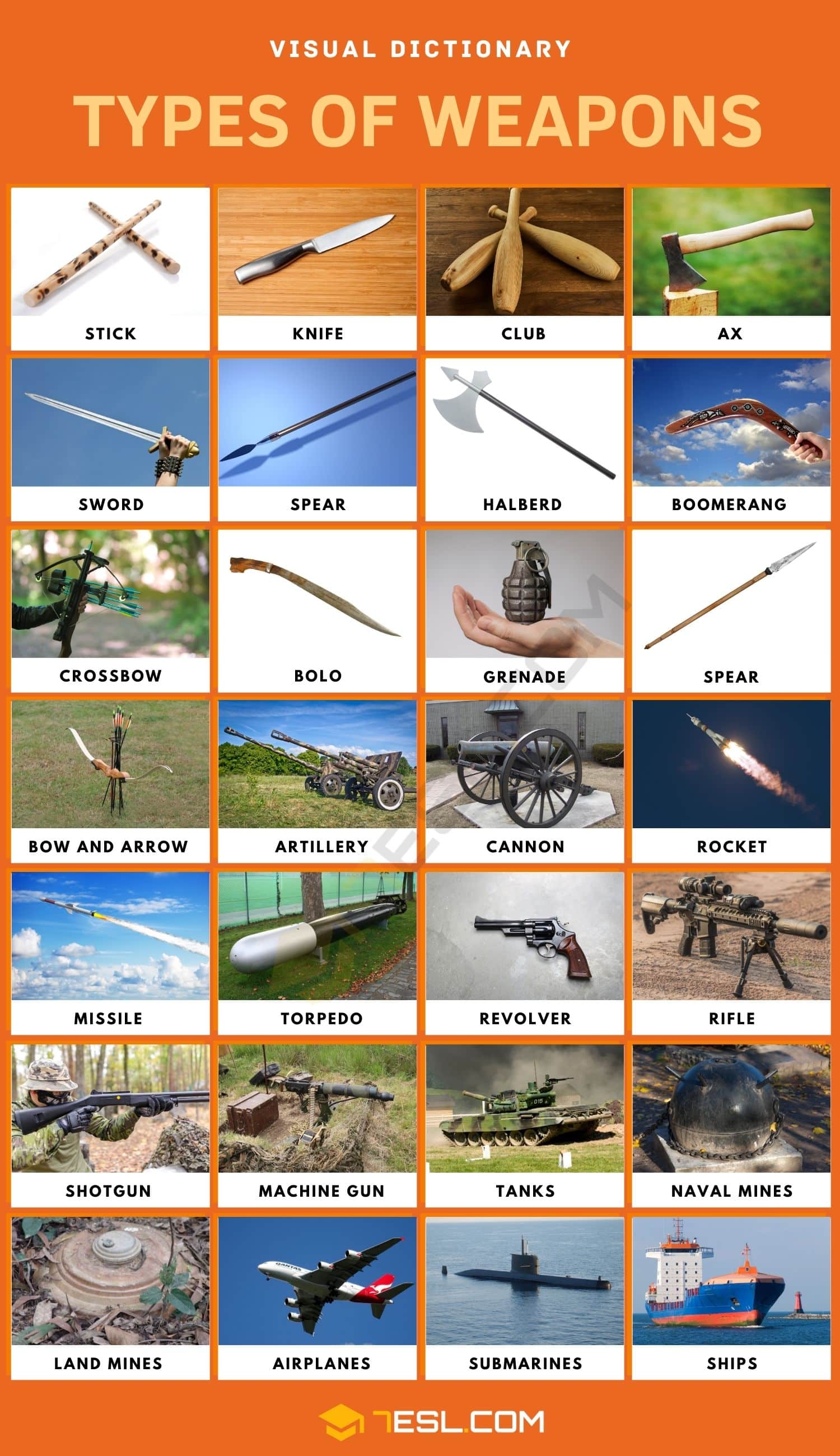 Short-range weapons include weapons that are used in close quarters, i.e. hand-to-hand combat. They were once widely used in warfare, but now are used mainly in hunting, law enforcement, and martial arts. They include the:

Long-range weapons are weapons designed to be used when far from a target or opponent. They have existed since ancient times and have become technologically advanced over time. They include the:

Firearms are a type of long-range weapon that dates back to the use of gunpowder in 10th-century China. Over time, these weapons have been widely used in warfare, in crime, by law enforcement, and for hunting. They include the:

Biological weapons are living organisms meant to attack the body. Consisting of bacteria, viruses, fungi, or parasites, they are frequently associated with terrorism and germ warfare. They include biological agents that cause diseases such as:

Chemical weapons are compounds that cause severe blistering, choking or extensive damage to the circulatory or nervous system. They have been used historically in warfare and genocide, and presently in law enforcement. They include:

Nuclear weapons are weapons that use atomic reactions or decaying radioactive material to do damage through explosions or by spreading radiation. They include:

These include vehicles or devices upon which other weapons may be mounted, including: 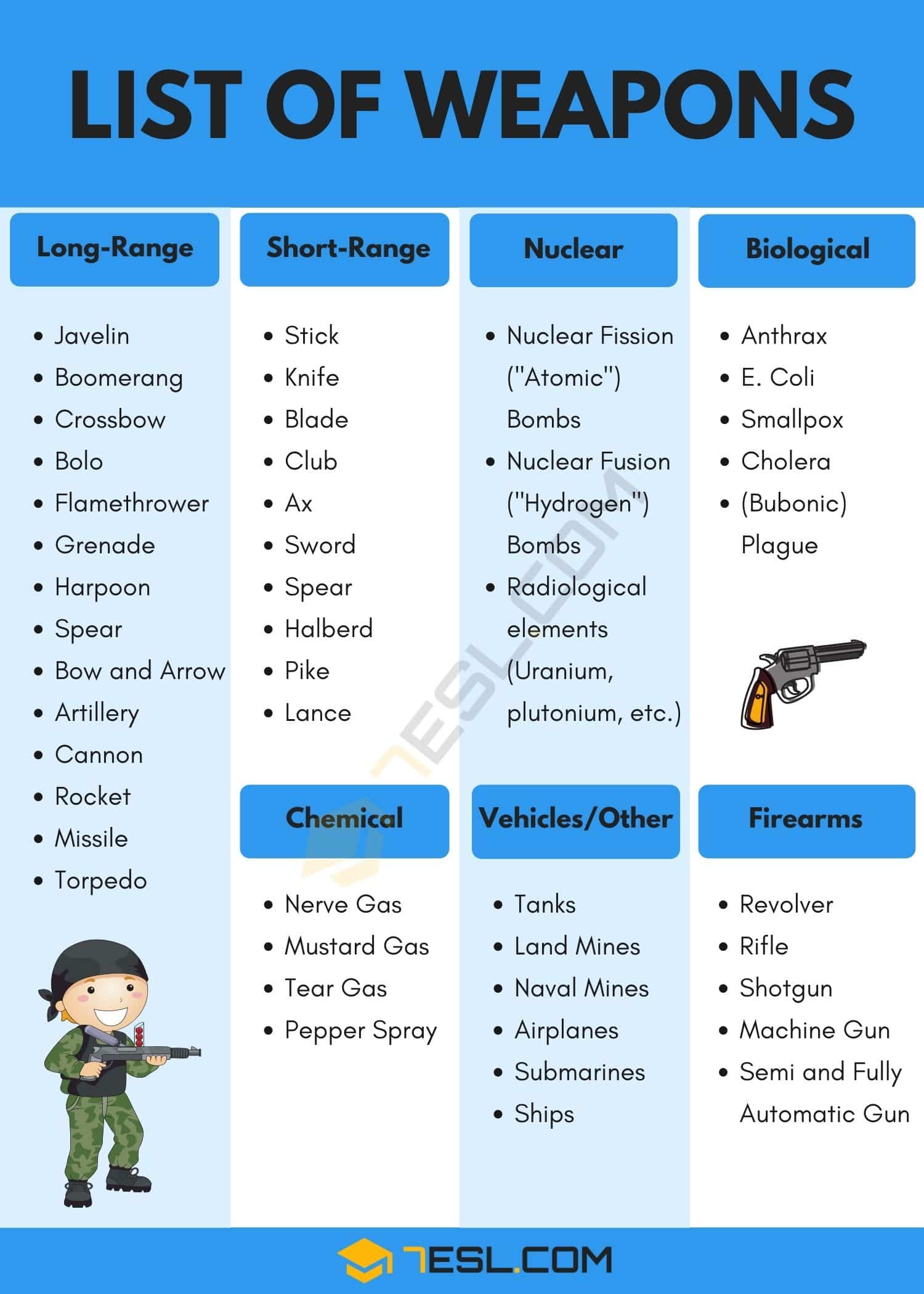