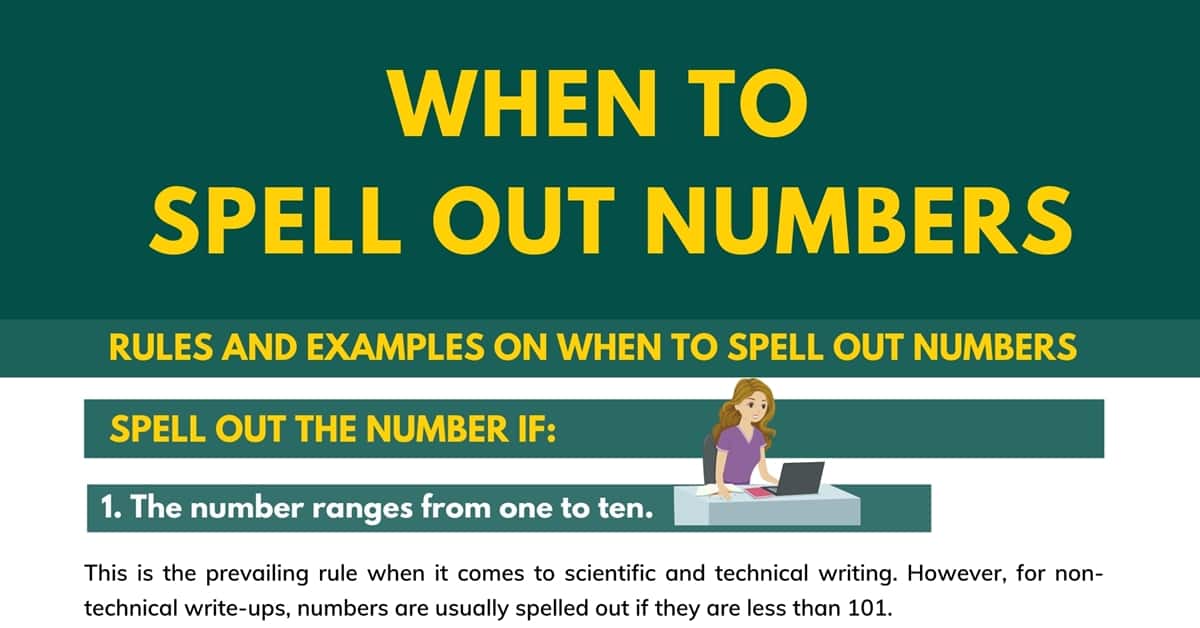 When to spell out numbers? Some authors prefer to write numbers as numerals instead of spelling them out since the former helps achieve a more concise text. Deciding whether or not to spell out a number is quite confusing. Generally, the number one rule is for the writer to express numbers consistently throughout the entire write-up. But for formality and appropriateness, check out the guidelines below to know when to spell out numbers in writing.

When to Spell Out Numbers

Rules and examples on when to spell out numbers

Spell Out the Number If

1. The number ranges from one to ten.

This is the prevailing rule when it comes to scientific and technical writing. However, for non-technical write-ups, numbers are usually spelled out if they are less than 101.

2. The number is conveniently round.

Conveniently round, in this context, refers to the numbers that end in multiple zeros. Examples are the amounts in hundreds, thousands, millions, and so on. Instead of putting all the zeros, you can write the number as fully-spelled words. Whole millions or billions can be expressed as numerals with the words “million” or “billion” after it. The whole numbers may also be spelled out if it ranges from one to ten.

3. The number is found at the beginning of the sentence.

Numbers that begin a sentence should be written in fully-spelled words. This is one fundamental rule that has to be followed all the time, no matter how small or large your number is. If you think the spelled-out number takes too much space for you, you would have to reconstruct your sentence so that the number would no longer be at the beginning.

DO NOT Spell Out the Number If

1. You are referring to a year.

If the year is not found at the beginning of the sentence, you don’t have to spell it out. Write it in numerical form to express direct and concise information.

2. The number has three or more digits.

This rule is specifically referring to numbers that occupy a considerable amount of space when written in words. Apart from taking more space, lengthy texts can either distract the reader or make the information less recognizable. Conveniently round numbers, as mentioned earlier, are exempted from this rule.

For a more accurate and uncomplicated way of relaying information, amounts with decimals should be written as numerals.

1. For values of measurement:

Values of measurement should be written in words if it is accompanied by its fully-spelled unit of measurement. If the abbreviation of the unit is used, you have to write the amount numerically.

When two numbers happen to be side by side with each other, you have to spell out one of the numbers. The selection as to which number should be spelled out depends on your choice. The primary purpose of this is to keep the reader from interchanging the two amounts.

When to Spell Out Numbers | Infographic