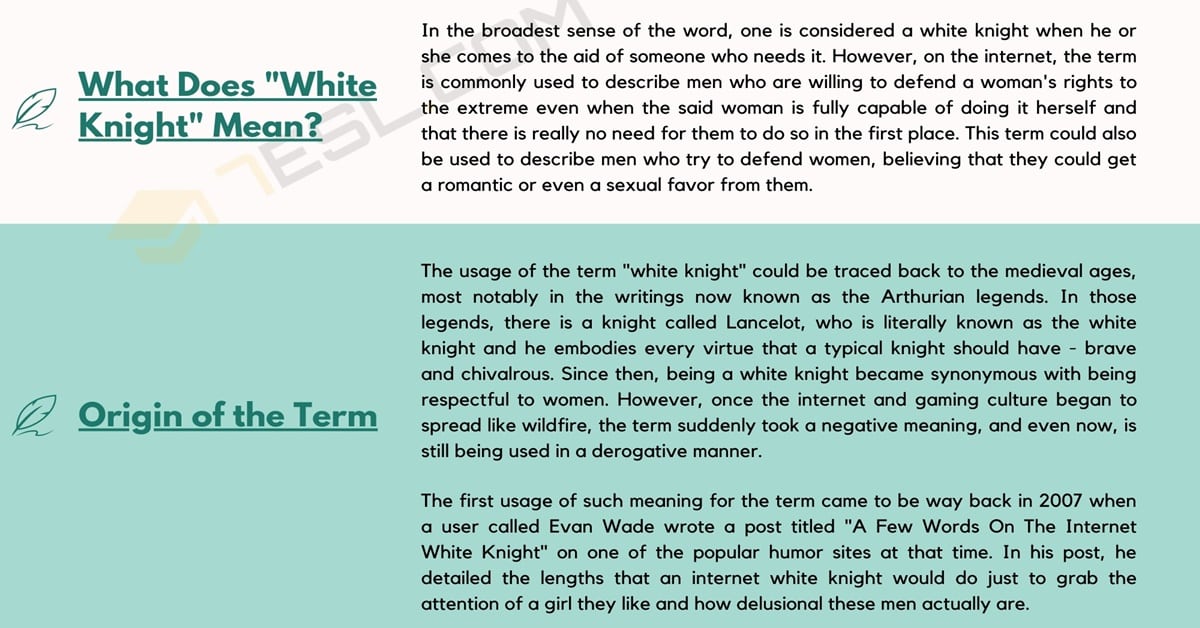 If you’ve been on the internet for a while now, especially if you’ve been to different social media platforms, you might come across the term “White Knight” or “White Knighting” sprawled all over. But what exactly does it mean? In this fast-moving age we’re currently on, these “slang words” could easily come and go and sometimes, they’re already extinct even before you get to understand what they meant. Hence, we’ve made this article to give you a brief idea of what does “white knight” means and how can you correctly use it.

What Does “White Knight” Mean?

In the broadest sense of the word, one is considered a white knight when he or she comes to the aid of someone who needs it. However, on the internet, the term is commonly used to describe men who are willing to defend a woman’s rights to the extreme even when the said woman is fully capable of doing it herself and that there is really no need for them to do so in the first place. This term could also be used to describe men who try to defend women, believing that they could get a romantic or even a sexual favor from them.

Origin of the Term

The usage of the term “white knight” could be traced back to the medieval ages, most notably in the writings now known as the Arthurian legends. In those legends, there is a knight called Lancelot, who is literally known as the white knight and he embodies every virtue that a typical knight should have – brave and chivalrous. Since then, being a white knight became synonymous with being respectful to women. However, once the internet and gaming culture began to spread like wildfire, the term suddenly took a negative meaning, and even now, is still being used in a derogative manner.

The first usage of such meaning for the term came to be way back in 2007 when a user called Evan Wade wrote a post titled “A Few Words On The Internet White Knight” on one of the popular humor sites at that time. In his post, he detailed the lengths that an internet white knight would do just to grab the attention of a girl they like and how delusional these men actually are.

However, the term only gained widespread notoriety three years later in 2010 when it was used by trolls to describe men speaking out about sexism. Nowadays, the term is widely used to call out someone who often acts in the defense of other people even if it is not really necessary to do so in the first place.

Other Meanings of White Knight

This term is also widely used in the business world but not for the same reasons discussed earlier. In this case, the white knight is an investor who saves a corporation on the verge of bankruptcy or from a hostile takeover of another party by acquiring it at a fair price. The white knight is preferred by a failing company since they tend to not replace the current management as opposed to those referred to as black knights, who will most likely change or sack the current management lineup.

Who Uses This Slang Word?

Nowadays, the term “white knight” is almost exclusively used by internet users. It is specifically widespread amongst the millennial generation and is sparsely used by the newer Generation Z as they have their own slangs that could more or less mean the same thing.

When to Use This Slang Word?

To know how to use this slang word, all you have to do is read comments on different videos detailing a controversy of a famous woman. If you see someone defending her by writing out an extremely long paragraph, which you think is completely unnecessary, then you got yourself a white knight on the loose. In that case, you can use the term to call him out if you want to.

A guy sees a post of a girl about how bad their boyfriend is. Even if no one asked for his opinion, he would suddenly comment on that post about how the girl deserves a better guy and that she should just dump him because he cannot see her worth. That guy we are talking about is a clear-cut example of a white knight.

“Why is this dude trying so hard to defend this woman? She does not even know him.”

“Just leave him be. The poor dude is just being a white knight in hopes of getting laid.”

What Does “White Knight” Mean? | Infographic 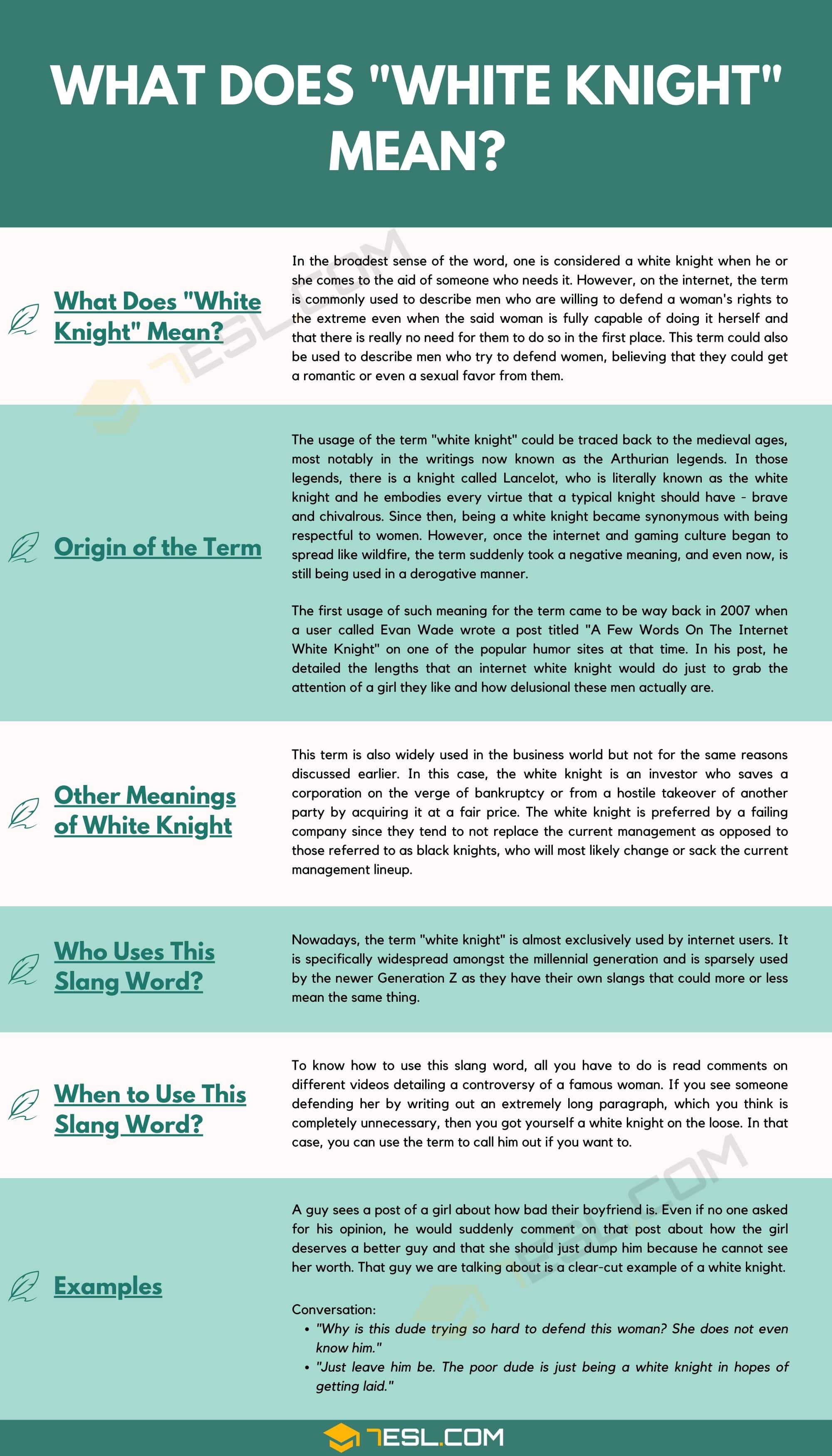