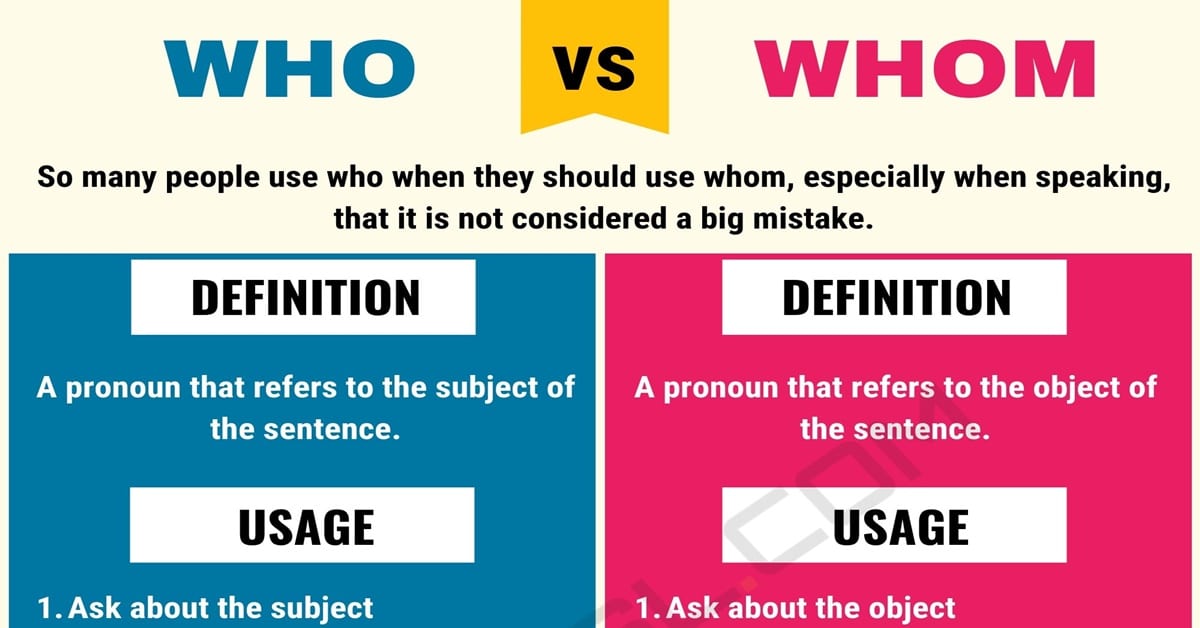 Differences between Who vs. Whom. The problem with the words who and whom is that not only do they sound very similar, but we use them in situations that are very similar too. Knowing when to use which of the words is a difficult thing, and some of the most enthusiastic writers in the world still don’t know how to use the two correctly, so where does that leave the rest of us?

Thankfully, this guide will take you through how to use who and whom correctly, provide you with some common mistakes and examples, and give you a helpful little trick to check if you have used the words who or whom correctly, or whether it needs to be changed to the other one.

So many people use who when they should use whom, especially when speaking, that it is not considered a big mistake. However, if you want to know the difference between whom vs. who and be sure that you are using the correct one. It is a pretty simple one.

Differences between Who vs. Whom

Whom is most often used to refer to the object of a verb or a preposition. Most often you’ll find whom following another word, as it is less likely to find whom at the start of a sentence than it is to find who there (although this isn’t impossible). Remember whom always refers to the object of the sentence.

When we use who in a sentence, it should always refer to the subject of the sentence, not the object. There is a straightforward way to remember this distinction, without having to identify whether you’re referring to the object or subject, which can often get confusing. Follow this simple shortcut below, and you’ll never make the mistake of using whom or who wrongly again!

Trick to Remember the Differences between Whom vs. Who

When using whom in a sentence, you should be able to replace it with her/him/them, and the sentence should still make grammatical sense. Like this:

Of course, the above example reads oddly, but it still makes grammatical sense (even if it feels a little Old English-y).

Likewise, when using who in a sentence, you should be able to replace it with he/she/they, and the sentence should still make grammatical sense again. Like this:

Here are a few general rules that will help you never get confused about which pronoun to put in a sentence:

When to Use Who

1) You are asking about the subject, i.e. the person who performs the action, e.g. Who is his mother? Who will come here tomorrow?

2) You are adding a clause to give additional information about the subject, e.g. Jennifer is my friend who likes reading.

3) You are asking about the name of someone or a group of people, e.g. Who is the class president?

When to Use Whom

1) You are asking about the object, i.e. the person to which the action is directed, e.g. Whom should I help? Whom did you ask to come with you?

2) You are adding a relative clause to give additional information about the object, e.g. She called the man whom she met yesterday.

3) You are asking an indirect question about the object, e.g. They asked me, whom I invited to dinner.

Common Mistakes When Using Who and Whom

There are several common situations in which we mix up who and whom, and do so regularly. This part of the guide will take you through those common mistakes, and highlight the best way to write the sentences, grammatically.

In the case of many of whom vs. many of who, there are often mistakes made by writers who simply do not understand why grammatically one makes more sense over the other. When you read them both out loud, they both sound right. In order to test which is the correct one grammatically, we can use our trick from earlier. Here’s an example:

Now we need to remember to change whom to either him/her/them, and who to he/she/they. As we are talking about the students, plural, we need to use them for whom, and they for who. Now let’s look:

Who to ask vs. Whom to ask

In the case of who to ask vs. whom to ask, it’s difficult to know which is correct again. The key – use the trick we provided earlier! Here’s an example for you to consider:

Typically, we would say do you know who to ask. But it might come as a surprise when we use our trick to see which is correct. Have a look:

This example doesn’t work completely perfectly again, and the bottom one sounds odd to the ear when read aloud, but it is grammatically correct. The top one is not. So we should actually say whom to ask.

This final mistake is another common one, and possibly one of the most common of the three we have looked at so far. In everyday speech, we would say who did you see? If a family member had been to the store but taken longer than usual we would be inclined to ask ‘Who did you see?’ but when we use our trick from earlier, the results might surprise you. Have a look at this example below:

Now neither of these really make sense when read aloud. But if we move the phrases around slightly, you’ll see a difference:

Now you can see that the bottom one is correct. So technically, when we are asking who somebody saw, we should ask ‘whom did you see’, not, as we more commonly do, ‘who did you see’.

The key thing to remember with these common mistakes is that whom always refers to the object of a verb or the preposition, whereas who refers to the subject of the sentence. In order to test whether you are using this relationship correctly, change whom or him/her/them in a sentence, and who for he/she/they. If the sentence still makes sense, then you know you have used the correct one.

How to Use Whom vs. Who | Useful Tips

There is a trick that will help you solve the “Who vs. Whom” dilemma you might be having when speaking and writing. If you can replace the pronoun with “she” or “he”, “who” will be correct. Otherwise, if you can substitute the pronoun with “her” or “him”, you should use “whom”.

Let’s say that you want to ask, “Who/ Whom took my book?”. The answer to this question might be, “She took my book”, not “Her took my book”. Therefore, in this case, it is correct to use “who”: Who took my book.

Take a look at a different example: “Who/ Whom should I ask about the plans for tomorrow?”. The answer will be, “I should talk to him”, not “I should talk to he”. This means that “whom” will be the right pronoun to use in this sentence.

On some occasions, however, it is a little bit more complicated and, in order to figure out which is the correct option, you will need to slightly rewrite the sentence.

Examples of Using Who vs. Whom in Sentences

Difference between Who vs. Whom | Image

Who or Whom – When to Use Who vs. Whom 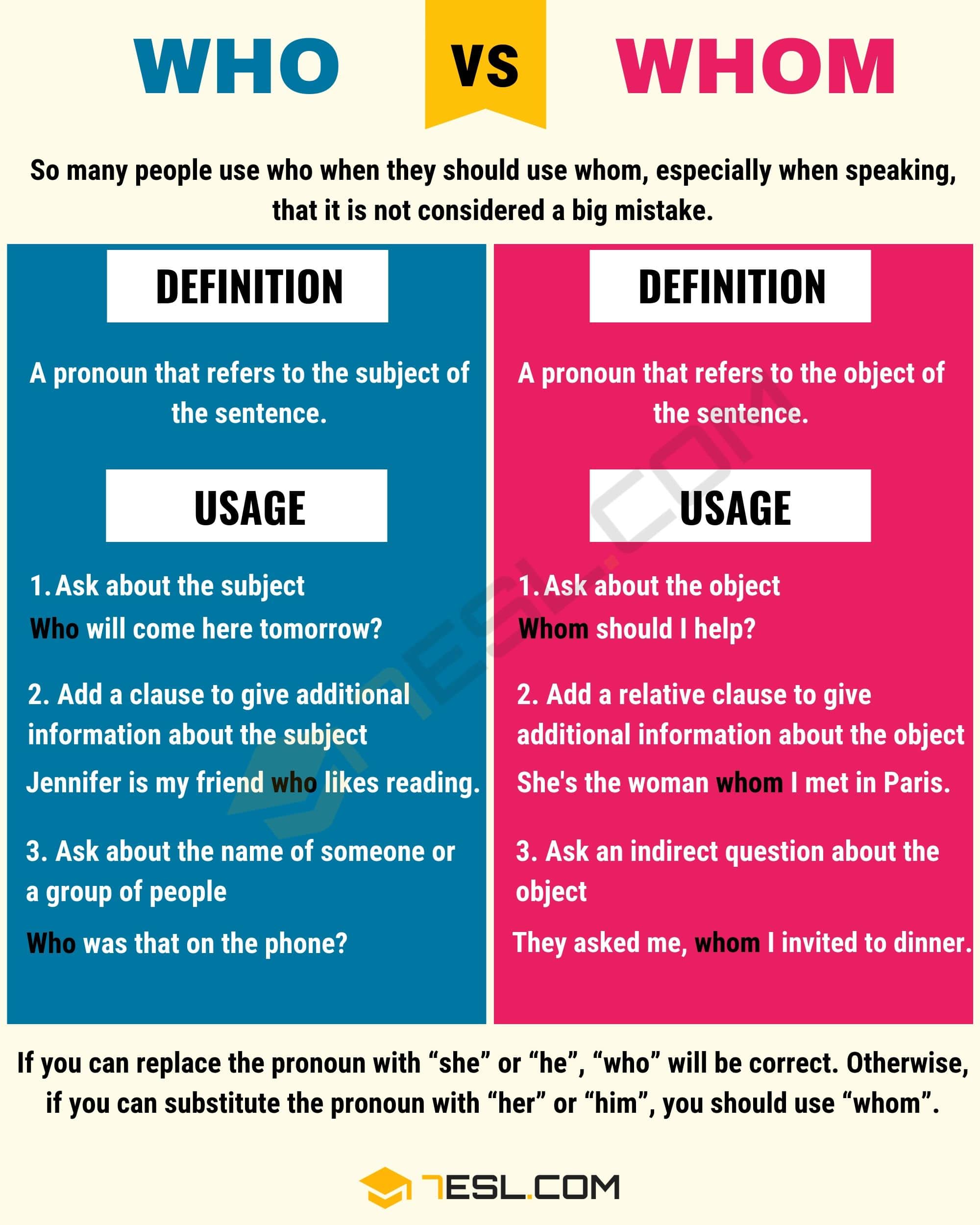 Please add printable versions to your website. Using “right-click, print” results in the partial loss of information at the top of each page. It is also time-consuming to have to return again and again for the same information when I could have it on hand instead.

If I was to ask someone who is chatting me on social media, I would use “whom” right?

Replacing whom with ”her him they” or who with ”he she they” doesn’t work.

The world is a book, and those who / whom do not travel read only a page.

The world is a book, and those him do not travel read only a page.

Could you give us the right trick, please!

They’re both “who” if we’re following the rules of this article. “I am/they are comfortable” and “they do not travel” would be what you’d replace the sentences with to find what to use.

But for what it’s worth, I don’t think “whom” is used in common speech anymore, in fact I don’t remember anyone using it in my lifetime without saying it in a satirical or ironic way. So I wouldn’t worry about it, unless it’s required you use very formal writing. You’d just come off as pretentious otherwise, especially if you can’t speak the way you’ve written.