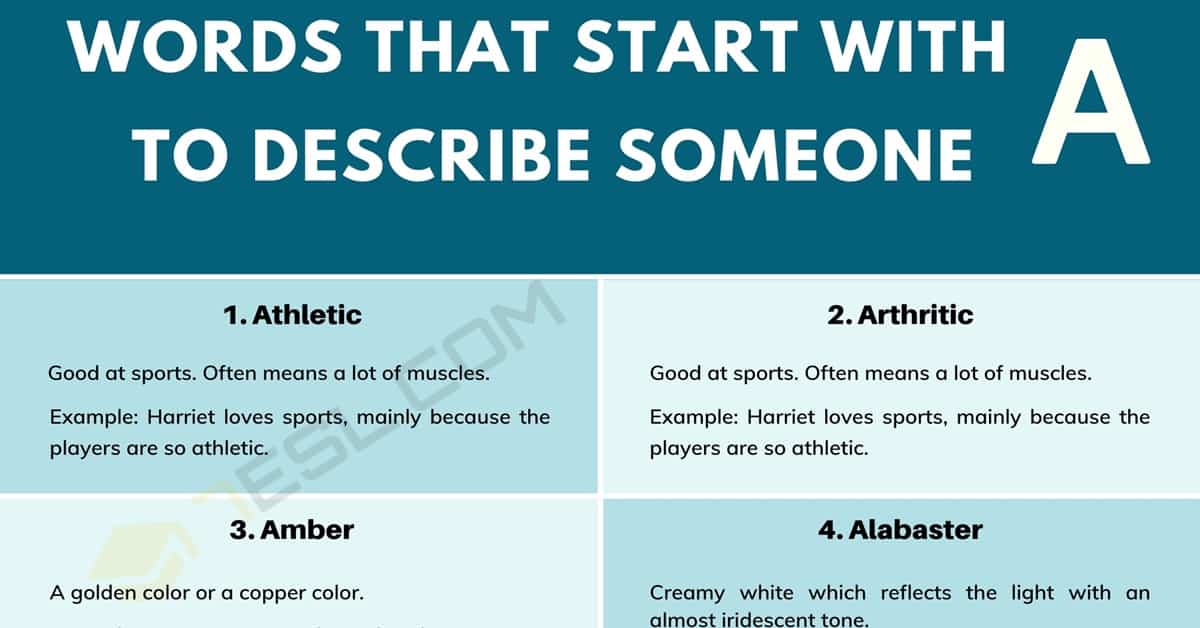 Ever watch cop shows? If you need a good laugh (and who doesn’t if they have been watching a cop show?) listen to this question that scriptwriters seem to love putting in: “Can you describe the person who did this?” What makes this funny is that they ask for a description from a person who was either screaming and running backward in mud, or had just had 5 beers and wouldn’t have recognized their own reflection.

But even if the person who saw the bad guy did have all their marbles in the beginning of the show, as we all know, descriptions can cover a pretty wide territory. When was the last time anyone got caught because a witness answered, “Yes, I can describe the person. They smelled like old socks”?

So, today, we are going to simply use a list of useful words that start with A to describe someone.

Words that Start with A to Describe Someone

Good at sports. Often means a lot of muscles.

>>Example: Harriet loves sports, mainly because the players are so athletic.

>>Example: Roger could handle the pain of arthritis but the swelling around his finger joints bothered him.

A golden color or a copper color.

>>Example: His eyes were amber colored.

Creamy white which reflects the light with an almost iridescent tone.

>>Example: Her skin was alabaster.

The shape of a flipped-over C. Often associated with the rounded top of a doorway.

>>Example: Her eyebrows were arched.

Gray or white skin caused by dryness. Especially a problem for people with dark skin tones.

>> Example: The woman on the beach had ample bosoms.

Stinky, almost to the point of burning a person’s nose.

>> Example: The room was filled with acrid smoke.

>>Example: Ted worked on becoming ambulatory again after his accident.

>>Example: I was wide awake all night.

No sense of right and wrong

>>Example: A society that is amoral will implode and not survive.

Able to use both hands with the same amount of ability

>>Example: Because Mike was ambidextrous, he could do the crossword with either hand.

Appearing to be both female and male

>>Example: She had an androgynous sexiness.

>>Example: He was an ardent suitor.

>>Example: He was active in organizing student meetings.

Hoping to achieve a goal

>>Example: The child had a wonderful voice. Already it was obvious he was aspiring to help others through music.

Against the generally recognized authority

>>Example: The rally was blatantly anti-establishment.

Feeling or saying that you are sorry for failing or for doing wrong.

>>Example: She gave me an apologetic smile.

The verb form of this, articulate, is pronounced “ar ti kyoo layt. This is not the verb form. This is the adjective form—“ar ti kyoo luht. It means good at communicating.

Words that Start with A to Describe Someone | Image

Words that Start with A to Describe Someone