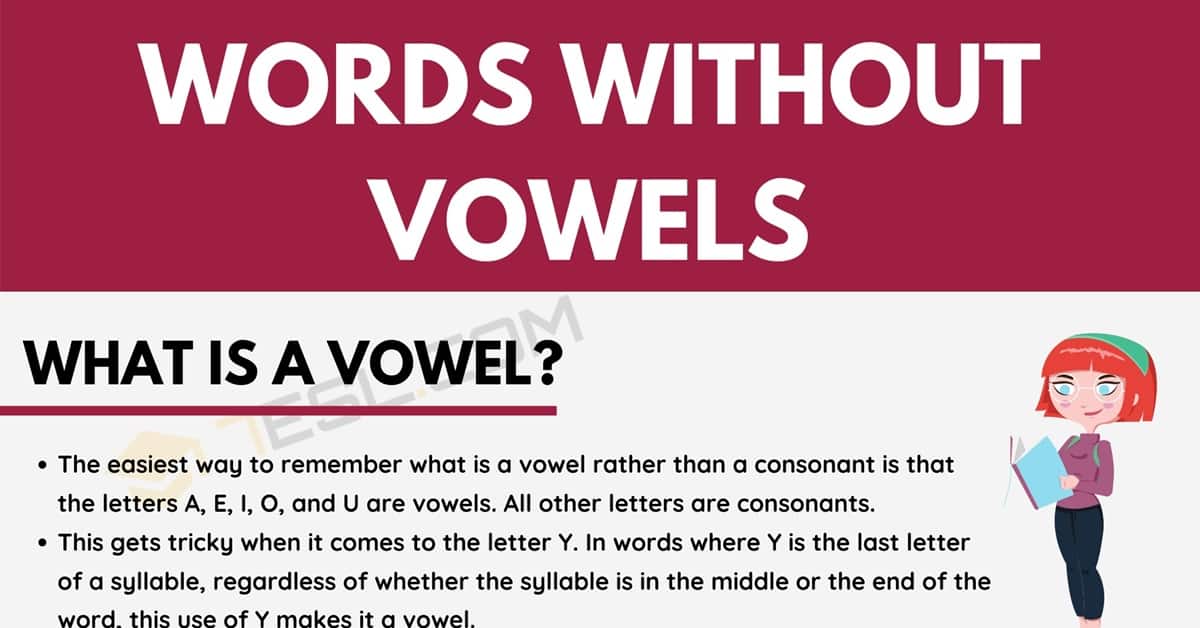 Words without vowels! It may be surprising to learn that the English language has many words that do not have any vowels at all. Vowels are the letters A, E, I, O, U, and sometimes Y. All letters that are not vowels are called consonants. Most people probably think they don’t know of any words without vowels, but there are special cases in which words can exist without vowels. Understanding this first takes an exploration of what a vowel is itself.

What Is A Vowel?

The easiest way to remember what is a vowel rather than a consonant is that the letters A, E, I, O, and U are vowels. All other letters are consonants. This gets tricky when it comes to the letter Y. In words where Y is the last letter of a syllable, regardless of whether the syllable is in the middle or the end of the word, this use of Y makes it a vowel. This is a very common use of the letter Y. The easiest thing to do is assume that Y is a vowel unless it meets certain criteria. Understanding this criteria takes a larger analysis of the definition of vowels and consonants.

Vowels and consonants are defined as speech sounds that are differentiated based on the way in which the sounds are articulated. In other words, vowels and consonants are determined depending on how they are said. By definition, letters are symbols that represent speech sounds, which are the noises that airflow makes as it streams through our vocal cords. How the sounds are made depends on whether the airflow is interrupted.

Think about the letters O and T. When articulate, the letter O involves an open mouth without any interruption of airflow. T, by contrast, can only be articulated when the tip of the tongue interrupts airflow. This distinction is what separates a vowel from a consonant. Vowels are speech sounds that do not interrupt the airflow to articulate. Consonants do the exact opposite, they interrupt the airflow. With this distinction in mind, the special circumstances of the letter Y are easier to understand.

Unlike other letters, Y can act as both a vowel and a consonant depending on how it is articulated in the word. In most words, Y acts as a vowel because it does not alter the airflow when articulated. If you try saying the word “why,” for example, the way in which the Y in “why” is articulated does not interrupt the airflow. To pronounce this form of Y, the vocal cord is open, so this is a vowel. Now let’s try the word “yarn.” In this case, the Y requires subtle interruption of airflow to articulate. In general, when in the beginning of a word, Y is a consonant. Similarly, when used in the beginning of a syllable, Y is also a consonant. Let’s try the word “say.” When you pronounce “say,” there is no interruption of the airflow to articulate Y, so it is a vowel. Now let’s pronounce “saying.” With the addition of the letters “-ing,” the Y is now the first letter of a new syllable. When said out loud, the Y in “saying” interrupts airflow and is therefore a consonant.

With the definition of vowels and consonants in mind, it’s easier to determine whether a word includes a vowel or not. A common occasion in which words do not have vowels is with abbreviations that have become words, like “Dr.” and “TV”. Similarly, “nth” is another unusual word that does not have vowels. This word is used to describe the number of something, as in “this is the nth time this has happened.” Some people include onomatopoeia as words without vowels. Onomatopoeia are words that spell out the sounds they are associated with, like “psst,” “shh,” “hmm,” “brr,” “pfft,” “mmm,” and “tsk.” These are words without vowels.

Some people argue that all words that include Y, but no other vowel, can be considered words without vowels. This isn’t entirely true, as Y can still be a vowel by definition. Whether you include these words or not, you can be confident that there are many words out there that do not have vowels. When in doubt, just remember the easy onomatopoeia words that we use in everyday conversation. 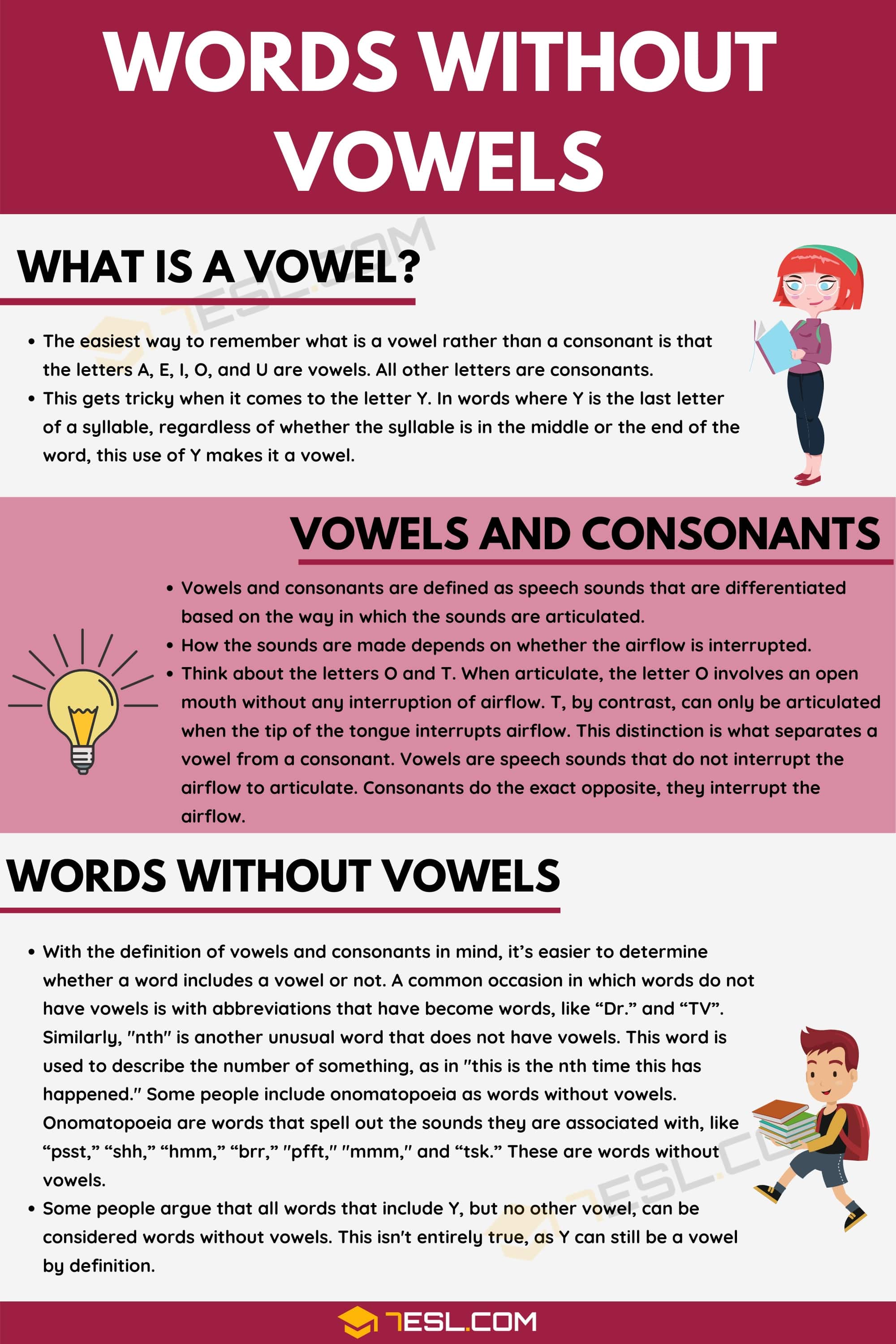 What about RHYTHM ? Is Y her a vowel?

Y is a vowel so it don’t work