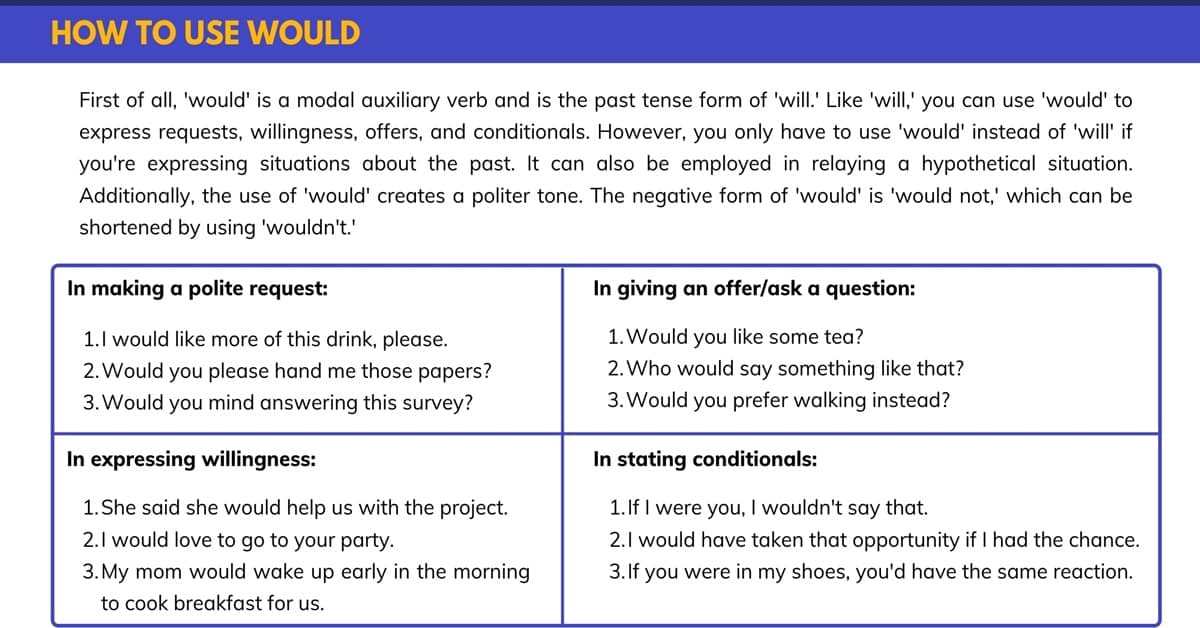 Helping verbs, also known as auxiliary verbs, are used to extend the main verb’s meaning in a sentence. These action words help in expressing the main verb’s tense and mood. However, if incorrectly used, it might undermine the purpose of having it in the sentence. Therefore, it is essential to know how helping verbs should be used appropriately in a text. Three of the most commonly used helping verbs are ‘would,’ ‘should,’ and ‘could.’ They sound almost the same and have the same tense, but those three modal auxiliaries don’t mean the same thing. In this article, we shall tackle how to use the said verbs.

Would, Should, and Could

How to Use Would

First of all, ‘would’ is a modal auxiliary verb and is the past tense form of ‘will.’ Like ‘will,’ you can use ‘would’ to express requests, willingness, offers, and conditionals. However, you only have to use ‘would’ instead of ‘will’ if you’re expressing situations about the past. It can also be employed in relaying a hypothetical situation. Additionally, the use of ‘would’ creates a politer tone. The negative form of ‘would’ is ‘would not,’ which can be shortened by using ‘wouldn’t.’

In making a polite request:

In giving an offer/ask a question:

How to Use Should

The verb ‘should,’ as the past tense of ‘shall,’ is generally used to give advice, talk about an expectation, or obligate someone. In its obligatory sense, it can be used as an alternative for ‘must.’ The negative form of ‘should’ is ‘should not’ or ‘shouldn’t.’ To further explain how ‘should’ is used, feel free to go over the examples below.

In expressing an expectation:

In relaying an obligation:

How to Use Could

‘Could’ is employed to express a possibility or past ability, make a request, or suggest an idea. It can also be used as the conditional form of ‘can.’ It cannot be used to point out an obligation nor convey willingness. It just mainly signifies the possibility of the idea being expressed. The negative form of ‘could’ is ‘could not’ or ‘couldn’t.’

In conveying a possibility/past ability:

In making a request:

In making a suggestion:

These helping verbs are then followed by the main verb to complete the meaning. Or it can also be succeeded by another auxiliary verb that could also change the tense of the whole action word. Use the discussed verbs correctly and according to the purpose you want to convey. Never forget that ‘would,’ ‘should,’ and ‘could’ are past tense forms of the verbs ‘will,’ ‘shall,’ and ‘can,’ respectively. The choice between which tense to use should also be considered.

When to Use Would, Should, and Could | Image