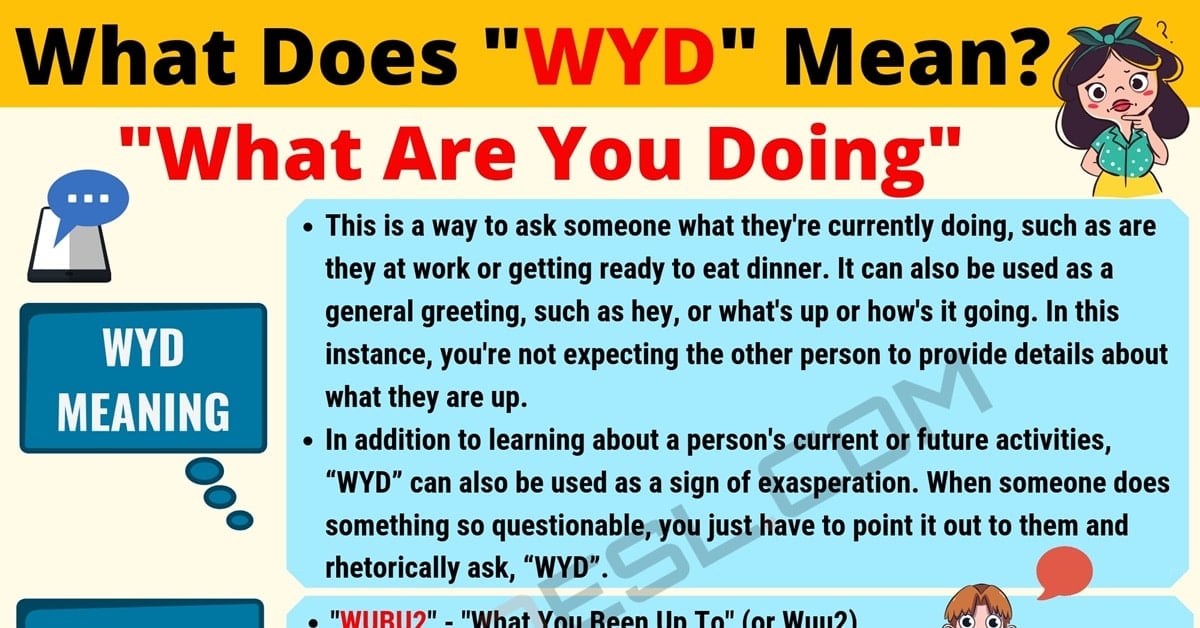 What does “WYD” mean? Do you actually know what this useful acronym stands for? This term “WYD” is used by just about everyone that texts so it has become one of the most used acronyms in the texting community. This would be considered casual, so you wouldn’t likely use it in a business email or as a response to your boss. However, you might use it for a colleague, as those conversations can be pretty informal, and even if it’s business-related, your tone of voice is still going to be more about time-saving than being formal.

What Does “WYD” Mean?

The text acronym “WYD” means “what are you doing”.

This is a way to ask someone what they’re currently doing, such as are they at work or getting ready to eat dinner. It can also be used as a general greeting, such as hey, or what’s up or how’s it going. In this instance, you’re not expecting the other person to provide details about what they are up.

In addition to learning about a person’s current or future activities, “WYD” can also be used as a sign of exasperation. When someone does something so questionable, you just have to point it out to them and rhetorically ask, “WYD”. Thanks to social media, “WYD” has also become a meme depicting a dramatic situation, such as a giant man hitting on your wife, and asking “WYD”.

In addition to “WYD”, you might also see “Wubu2”, or what have you been up to. In this instance, you’re asking what the other person has been doing before your conversation. This is a good way to find out how a person’s day is going. And if anything new has occurred since your last conversation.

You could also use “Wuu2” which is almost the same thing as saying, “WYD”, since it stands for what are you up to. In this instance, just as with “WYD”, you’re asking the other person what they’re currently doing or are planning to do.

There is also “WUD”, which is most often used by men during late-night messages to females in an attempt to hook up. However, it can be seen used by younger texters who don’t mind using “U” in place of “Y” for “you”.

Here are a few examples of how you might see this acronym used:

In this conversation, you notice a lot of text talk. Don’t be alarmed. Everything will be explained. As you can see, Speaker 1 is asking Speaker 2 what he is doing. This implies he’s asking for specifics about Steve’s current activities. Speaker 2 responds with “NM” which means “nothing much” then asks “HBU”, which means “How about you?” This means Speaker 2 is also asking Speaker 1 what they are doing.

Speaker 1 explains he’s doing the same thing as Speaker 2 then asks Speaker 2 to hang out. In the final line, Speaker 1 says “HMU” which means “hit me up”. This is Speaker 1’s way of saying let me know when you’re ready so we can make further plans.

“NMHBY” stands for “Not Much How About You.”:

Now, in this example, you see Speaker 1 use wyd as a way to say hi or hey. Instead of answering the question of what you’re doing, Speaker two automatically went to WUBU2, which is her way of asking what Speaker 1 has been up to, or is doing. 2nite should be easy enough for you to understand, meaning tonight. Nada means nothing, which we all were saying long before cell phones existed. “SYS” means “See you soon”.

In this conversation, “WYD” was again used as a hello. “NM” means not much. “WUUT” means what are you up to. Speaker 2 says I don’t know, I have to check with my girlfriend. Speaker 1 responds with “Lol”, meaning “laugh out loud.” Speaker 2 ends the conversation with “IW” meaning “I
will.”

When this text pops into your messages at 3 am, typically it gets ignored.

Other Meanings of “WYD” 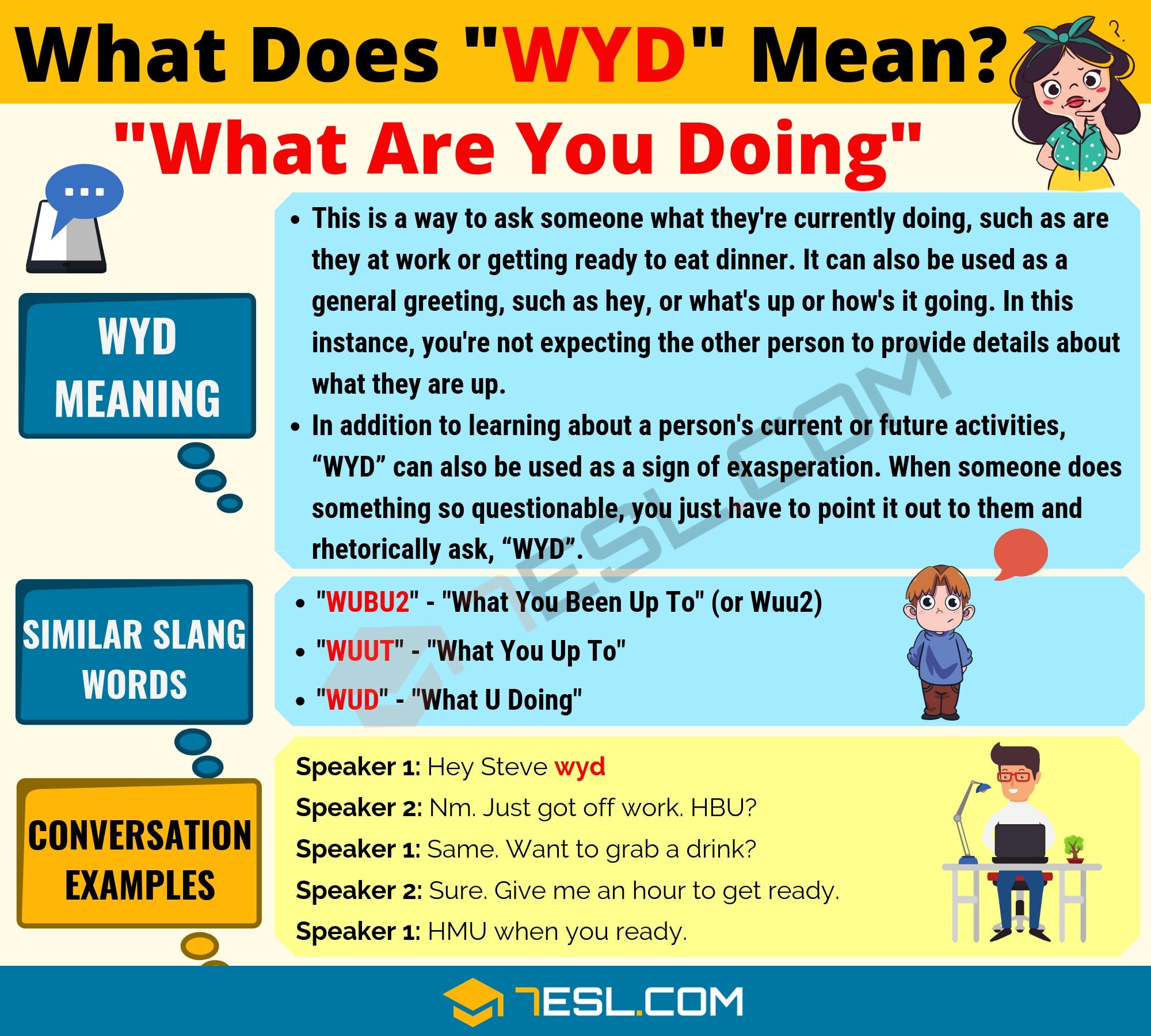 Other Ways to Say “WYD”