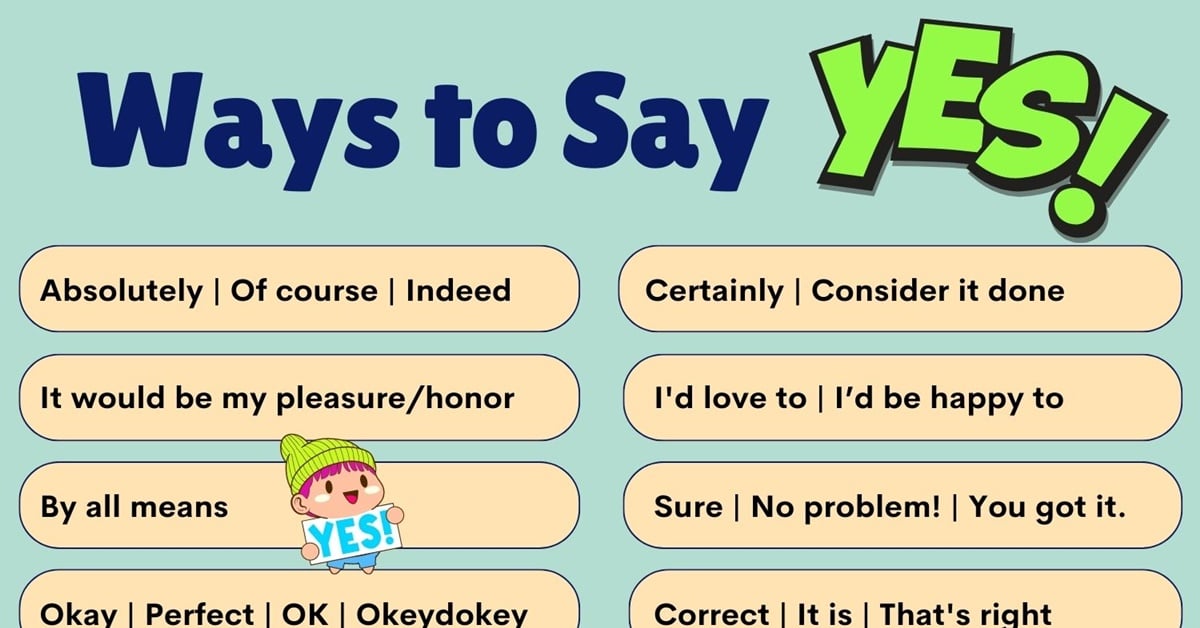 The word “yes” in English has its roots in the Old English “gēse” which, at the time, was a shortened way to say “may it be so.” By the 12th century, it was a very common way to respond affirmatively.

Be as it may, “yes” currently stands among the most flexible words in the English language, with a broad range of variations and usages.

We say “yes” whenever we want to express agreement, accept a proposal, or issue an affirmative response to a binary question (also referred to as a “yes-no question” or “polar question”). These are closed-ended queries insofar as the person answering them must choose among a predetermined set of possible choices.

For example: “Are you a student?”

Yes-no questions are contrasted with wh-questions (“who”, what”, “when”, “where”, “how”, and “why”), which require further elaboration.

Other contexts in which the word “yes” is utilized include:

– Interrogatively. For example, when a person wants to encourage the interlocutor to continue speaking or finish an idea. To illustrate:

– To express excitement over a favorable outcome. Example: “Yes! We won!”

– To express annoyance at another person’s statement in a snarky manner. Example: “I think you’re despicable!” – “Oh yeah? So do I!”

– To highlight an assertion, especially when it’s hard to fathom. Example: “She told me he was handsome. Yes, handsome! Can you believe that?”

How to Say “Yes” in English

You’d be surprised to learn that the word “yes”, while not infrequent, is not as widely used in English everyday lingo as many of its variations.

Let’s begin with the formal ways to say yes, just to give an idea:

Formal language is used when dealing with strangers or in an official setting that requires the highest degree of etiquette.

These are some examples of how to say “yes” in a formal manner:

To show total disposition towards another person’s request.

Example: “Could you send me the draft?”

A formal way to accept an invitation.

To make a person know they have ample permission to do something.

Example: “Could I make a small suggestion?”

“By all means, feel free to suggest anything!”

Examples of “yes” synonyms for professional settings include:

Sure | No problem | You got it

To indicate consent to do something upon another person’s petition.

Example: “Could you please pass me that quotation?”

To acquiesce to a request or acknowledge that a piece of information was received approvingly.

Clerk: “Are you bringing pets?”

Correct | It is | That’s right

Used to confirm the validity or accuracy of a statement.

Example: “Is your name Clark?”

Informal language is a more casual way to approach people within trusted circles or in situations that don’t call for a professional or formal voice. It relies on commonly known colloquialisms.

To show you’re of the same mind as the other person making a claim.

“Totally! That guy is a freak!”

To manifest agreement or accept an invite.

Example: “Are you coming?”

It’s very similar to informal language but typically used within specific social groups, such as teenagers or locals. It could sometimes be construed as offensive when used on people not prone to speak that way. Some slang terms have been so popular that they’re used in every informal scenario.

An expression utilized as a sign of assent or to give the impression you understand the information being provided. It could come off as condescending or showing a lack of interest when repeated too many times.

Example: “I just went to the barbershop.”

“Did you listen to what I just said?”

English speakers often don’t distinguish themselves from speakers of other languages when making affirmative gestures and sounds. These signs are nearly universal and capable of communicating like-mindedness even if the interlocutor doesn’t speak the same language.

Some universally accepted gestures that replace or accompany the “yes” word include the “thumbs up”, the “wink” or “high brow” (usually coupled with a smile), and, of course, the traditional “nod” (lowering and raising one’s head in quick succession.)

The most common sound indicative of an affirmation, apart from the words described above, is “hmm hmm” – with emphasis on the last “hmm” (emphasis on the first “hmm” would indicate a negative response.)

This was far from an exhaustive list of ways to say yes in English, but hopefully, we were able to cover the most noteworthy ones. This shows just how dynamic and flexible the English language has become, especially in a day and age marked by globalization and frantic social and cultural shifts.

Other Ways to Say Yes | Image 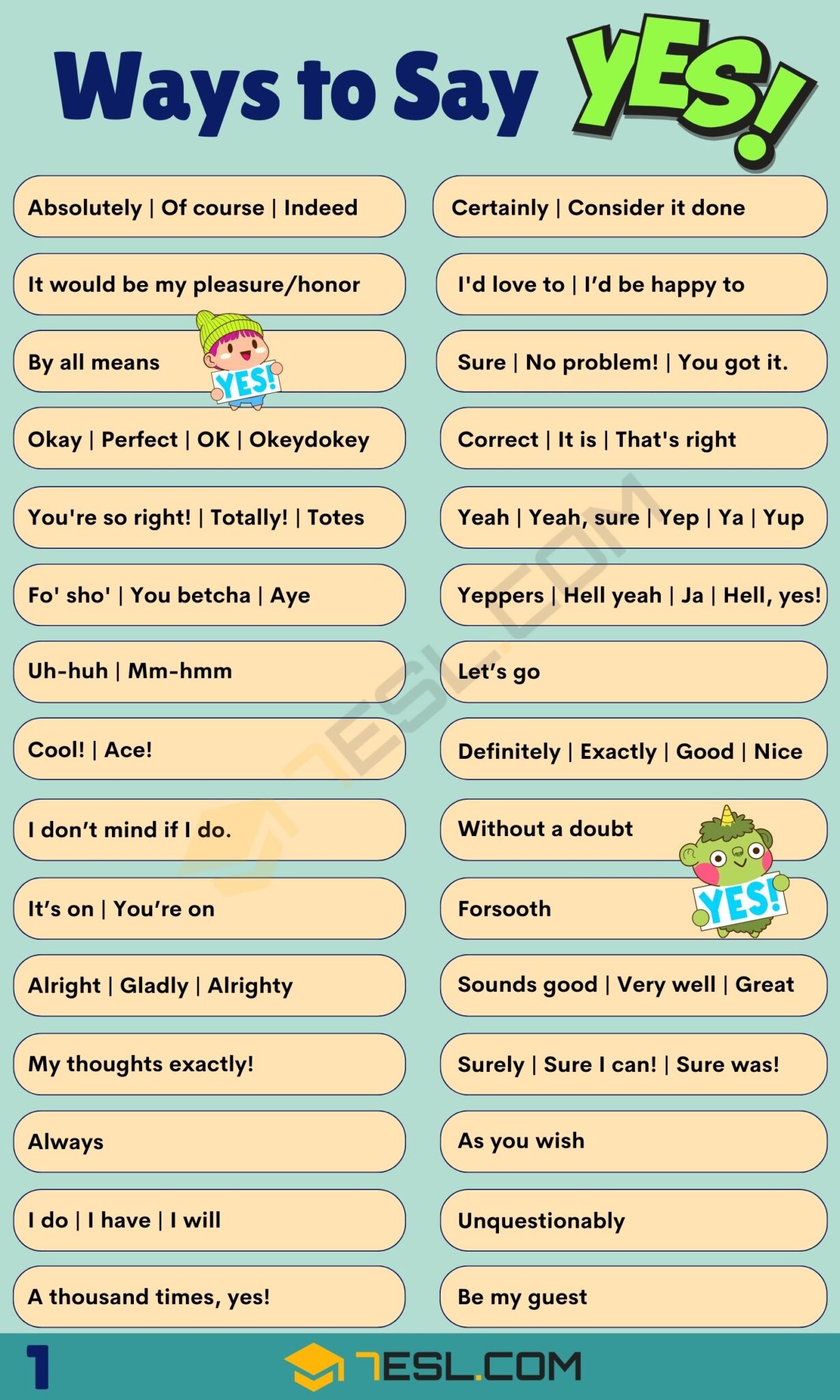 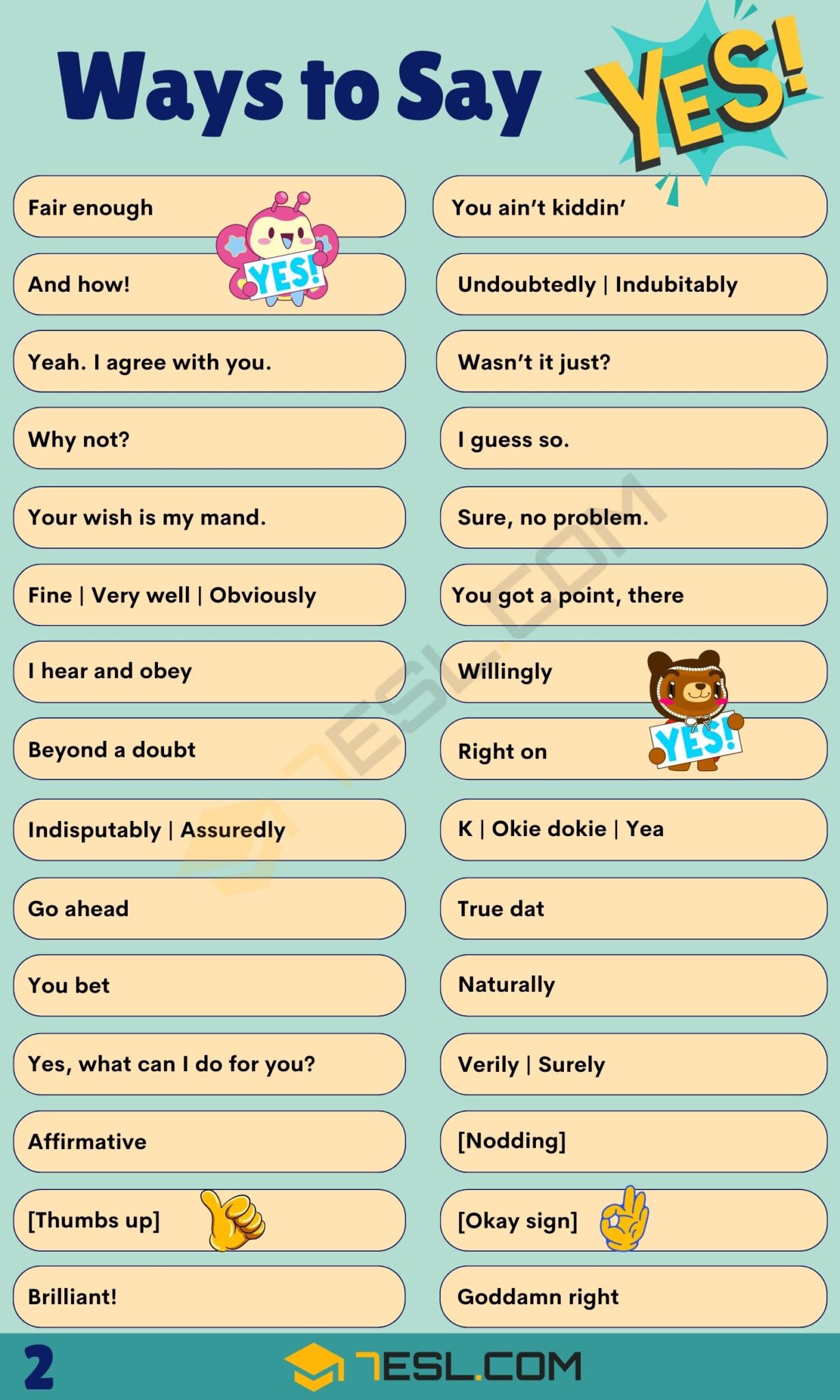