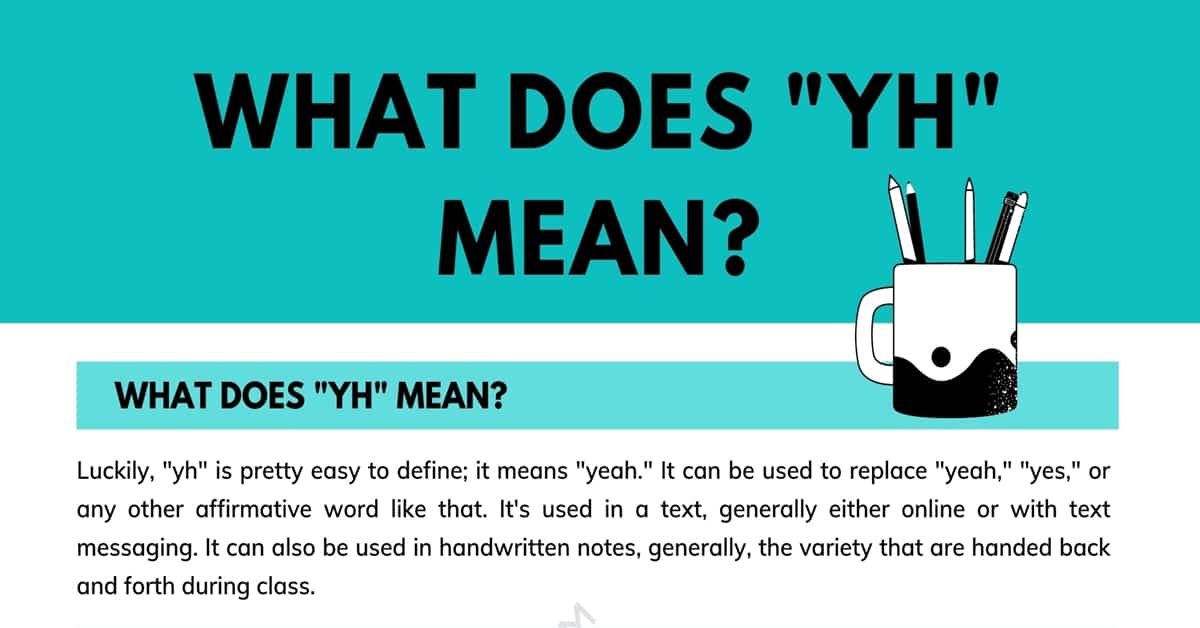 English can be a tricky language, and sometimes, just when you think you’ve got it, there’s a word or phrase that doesn’t make any sense. Often, this is because it’s an abbreviation, acronym, idiom, or slang. The internet, in particular, seems to have its very own language in addition to whatever language its users speak aloud. We’re here to help you understand, this time with the meaning of “yh.”

What Does YH Mean?

Luckily, “yh” is pretty easy to define; it means “yeah.”

It can be used to replace “yeah,” “yes,” or any other affirmative word like that. It’s used in a text, generally either online or with text messaging. It can also be used in handwritten notes, generally, the variety that is handed back and forth during class.

Depending on what source you check, you might find two different explanations for how “yh” started being used.

In the most common explanation, “yeah” is simply shortened to “yh,” much like “doctor” is shortened to “dr.” This halves the number of letters a person needs to type and can speed things up if you and the person reading the message are both familiar with it.

In another explanation, it’s actually more of an acronym than an abbreviation and is used in place of “Yuh-Huh,” which also means “yes.”

While the vast majority of instances of “yh” online or in the text seem to be short for “yeah,” there are occasionally other ways people use this,

“Yh?” can mean “you here?” or “you home?” Context clues play a big part in spotting this usage. If you’re meeting up with someone and haven’t just asked them a question, this might be what they mean. If you’re not sure, ask them to clarify. When people are using shortcuts like “yh,” you can usually respond with just a question mark if you need more explanation.

“Yh” can, rarely, mean “yahoo.” This can either be the expression of joy, sarcastic or sincere, or it can be yahoo.com.

“Yh” can be used by anyone, but it tends to be used mostly by people who frequently shorten their words online and in text. This can mean teenagers and young adults. It can also mean adults who grew up using text speak. It can even be older adults who want to lessen the pain in their hands caused by excessive typing.

“Yh” is very informal, so it should only be used in informal situations. It’s also only an abbreviation in writing; it takes longer and more effort to say “yh” than it does to say “yeah,” depending on your pronunciation, and people are much less likely to understand what you’re trying to say if you say it out loud.

You should also use “yh” in situations where it’s okay if there’s a misunderstanding or it’s okay for the person you’re communicating with to ask what you mean. That way, if they don’t understand, it’s not necessarily a huge deal.

It’s also okay to use “yh” and other text speak to signal that a conversation is informal and casual.

In case these seem like random letters or some sort of code (which they definitely do if you’re not used to seeing this type of talk!), these translate to, in order, “Yeah, I’ll go,” “Yeah, don’t be late,” and “Yeah, yeah. I don’t know.”

A great alternative to any abbreviation or acronym is to spell out whatever it is you’re trying to say. This significantly lessens the chances of misunderstanding and can help make sure everyone is on the same page. For “yh,” then, you can say “yeah” or “yes.”

In some situations, you might feel the need to communicate a little less formally than usual. If you still want to avoid “yh,” you could use “yup” or “uh huh.” These work out loud, as well.

In a formal situation, try “yes,” or “certainly” or “I agree.” These work out loud as well as in the text.

What Does YH Stand for? | Infographic