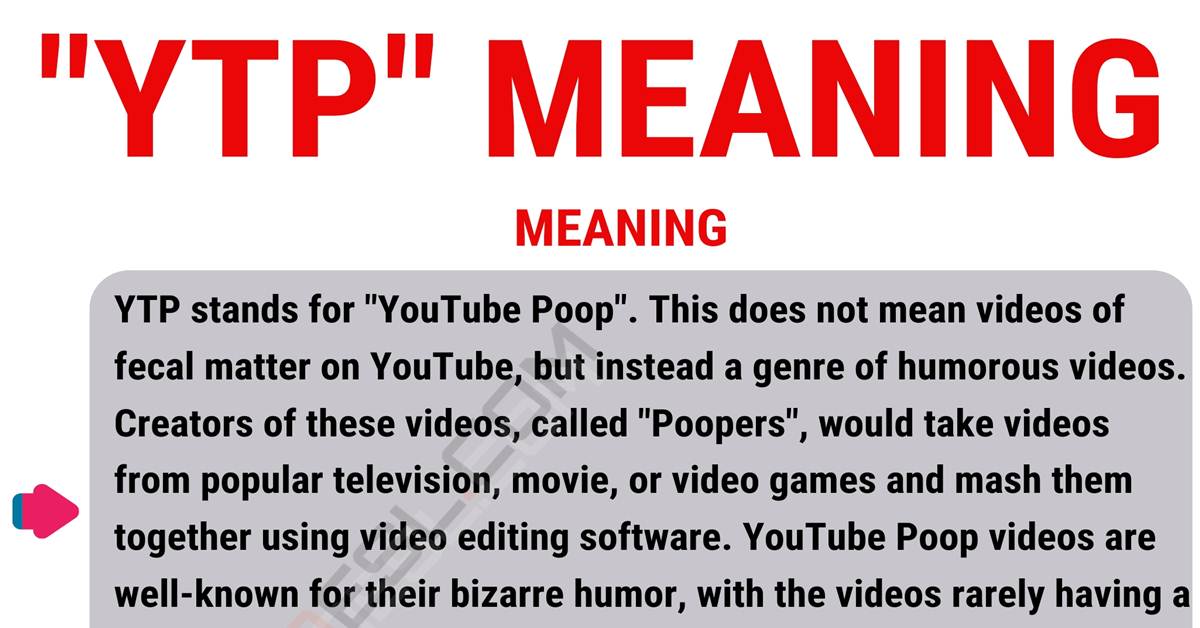 YTP is an acronym for a type of video found of YouTube. Learn the definition and how to use the acronym “YTP” with ESL picture and useful text conversations in English.

What Does YTP Mean?

YTP stands for “YouTube Poop”. This does not mean videos of fecal matter on YouTube, but instead a genre of humorous videos. Creators of these videos, called “Poopers”, would take videos from popular television, movie, or video games and mash them together using video editing software. YouTube Poop videos are well-known for their bizarre humor, with the videos rarely having a coherent plot and designed to throw out as many jokes and gags, to the expensive of the source material, as possible.

YouTube Poop began on December 22, 2004 when an internet user using the name “SuperYoshi” made a short video using Windows Movie Maker. The video took an episode from the old cartoon The Adventures of Super Mario Bros. 3 and with the software SuperYoshi edited the footage in a random manner. When posted online, the video got positive reception encouraging SuperYoshi to make more videos like it. As the videos became more popular they shifted from being completely bizarre and tried to focus on some narrative structure, even if said narrative didn’t make much sense. By the 2010s, YouTube Poops suffered a massive decline in popularity due in part to other more professional humor videos overtaking them and YouTube cracking down on any copyright infringements, which many YouTube Poop videos had.

YTP can also be used as an acronym for “Young Teen P***”, normally referring to an attractive teenager girl. Normally this slang is used by other teenagers but unfortunately this usage of YTP has seen use by pedophiles online.

YTP is normally spelled in all uppercase or lowercase. There are no other variants.